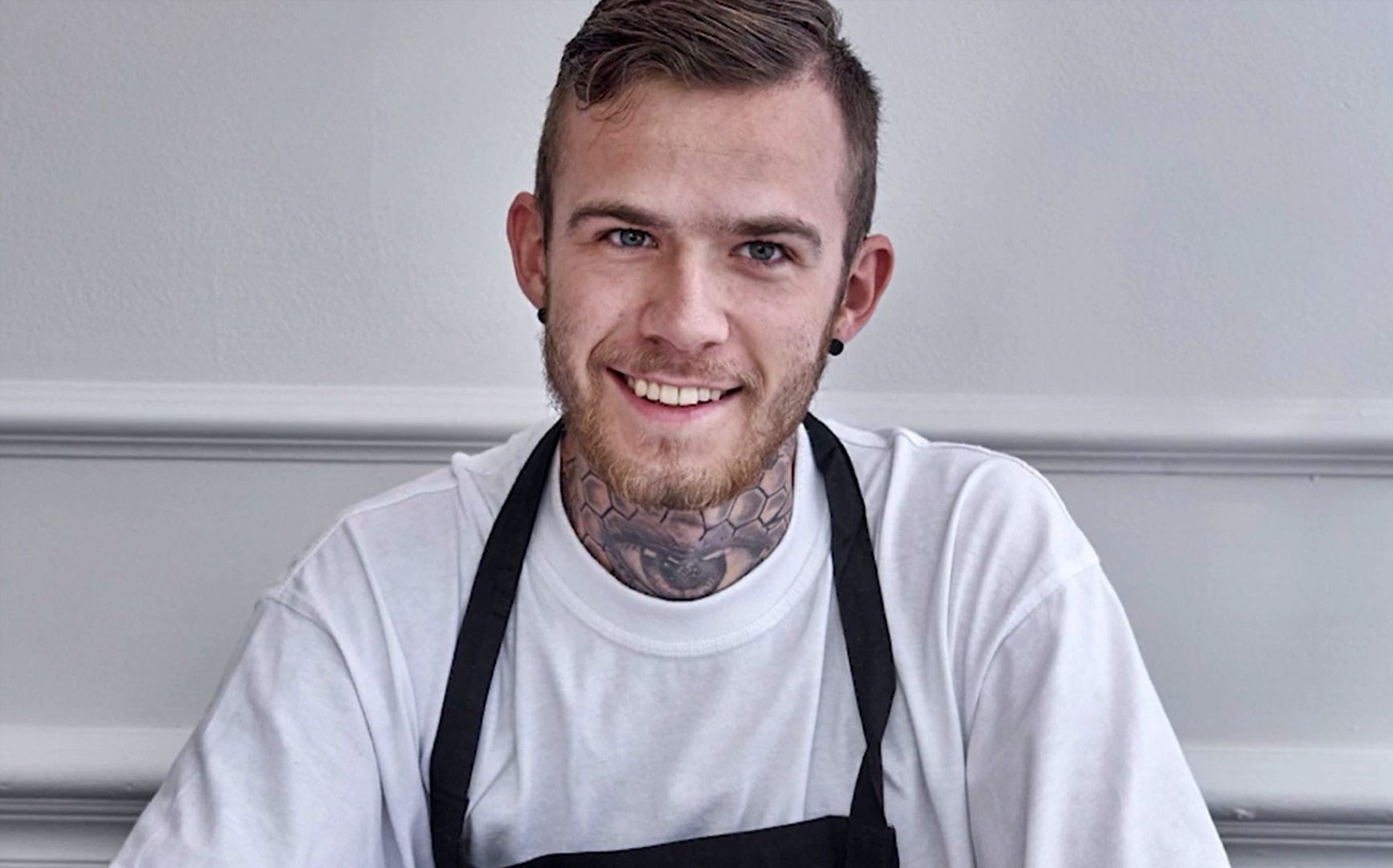 Since it began in March, the Coronavirus lockdown has provided an opportunity for students of Westminster Kingsway College and The Vincent Rooms to put down their utensils and engage with renowned chefs.

The college – home to London’s leading culinary school – has hosted four online ‘lockdown’ question and answer Masterclasses for students so far, with chefs Ben Murphy, Freddie Forster, Selin Kiazim and Andrew Wong – all of whom are alumni of the college. The Masterclasses gave students a unique opportunity to hear the alumni talk about their careers so far and what they have learned along the way, as well as their top tips for success.

The first Masterclass was on 1 April with Ben Murphy, head chef at Launceston Place restaurant in London’s Kensington, who gave a ‘warts and all’ talk about his career. Ben graduated from our Professional Chef Diploma course in 2010 aged just 19 and went on to work in France and at the five-star Berkeley Hotel, Knightsbridge. He said: “The college is the foundation of everything that I learned, from holding a knife to making a base for a sauce.

“But it wasn’t just the cooking. I learned how to be more patient, how to respect my elders and those who know more than me.” He went on to talk about those that influenced his career including mentor Norman Fu and his tutors at WestKing, whose advice and feedback he still seeks. Career highlights for Ben include being driven by Pierre Koffmann to the south of France to work in a 3 Michelin starred restaurant. “It was tough, but I learned a lot and eventually I think I earned their respect,” he said. Providing inspiration to the next generation of culinary and hospitality professionals, Ben told them: “You get out what you put in. The harder you work, the more you get. Live your best life, be happy and have no regrets.”

The next chef to share their expertise and experience with students was Saturday Kitchen regular and former Head Chef at le Pont de la Tour restaurant in London, Freddie Forster, on 8 April. Describing his decision to stay at the college and complete his final year as “the best decision I ever made,” Freddie graduated from the three-year Professional Chef Diploma course in 1990 and went on to work for Raymond Blanc in a career that has taken him all over the world. Freddie’s Masterclass covered everything from his favourite dishes to cook and eat, to staying positive and setting goals. Freddie provided a unique insight into the impact of the pandemic and how he believes it will affect the service industry. He discussed the need for restaurants to be more vigilant on spending money and how hygiene practices will change. You can watch it here:

Our third culinary Masterclass was on 23 April, with Selin Kiazim, who graduated from the college in 2008. Students logged in to hear her talk about her time at WestKing and how competing in culinary competitions helped shape her future. One of these competitions resulted in her winning a five-week trip to New Zealand where she met world famous chef Peter Gordon. She went on to work for him and eventually became head chef at the Kopapa restaurant. Trying to establish herself in her own right, she then ran several pop ups across the UK and it was only after a career-changing review from Giles Coren in The Times that she gained confidence in her Turkish Cypriot cuisine and opened her restaurant Oklava in 2015. Selin also competed on The Great British Menu in 2017 and her dessert was selected for the final banquet.

Students questioned Selin on being a female in a male-dominated industry. She talked about the harsh reputation that working in kitchens has and how working for Peter Gordon taught her that nurturing her staff is important. “The way that I treat people and the way I run my kitchen is very much in line with him [Peter Gordon],” she said. Watch Selin in action:

Andrew Wong – the host of our fourth Masterclass – grew up in a culinary family. His parents were restaurateurs, but the young Andrew was much more interested in studying to go to university than helping out in the kitchen – indeed he deliberately threw himself into his studies so he wouldn’t have to work in his mum and dad’s traditional Chinese restaurant. But people, and circumstances, change and after leaving university and training to be a chef at Westminster Kingsway College, Andrew is a highly accomplished chef with a Michelin Star for his restaurant A. Wong. Watch his Masterclass here:

Programme Manager for the Professional Chefs Diploma at Westminster Kingsway College, Paul Jervis, said: “We are a very well-connected college and these Masterclasses are a unique chance for students to hear first-hand from people who are not only their heroes in the industry, but who, like them, have studied here. We’ve been delighted to run four Masterclasses so far and we are really grateful to Ben, Freddie, Selin and Andrew for taking part.”

“We have a lot of other talented and successful culinary alumni who we keep in regular contact with. We’re pleased that so many of them want to help inspire the next generation of chefs and so we’re planning more Masterclasses, with more alumni, as the lockdown continues.

MORE NEWS...
RATE US ON TRIPADVISOR

Veniceaddict7
Delightful meal Visted for lunch today in Escoffier Room (held in Brasserie section on this occasion). Welcomed warmly by reception and students as usual. The Escoffier menu was outstanding. There was not a course you could fault. The compte brulee was my favourite - will try and duplicate this at home! Food was beautifully presented and superb. The students were effecient,friendly and helpful. Better than my birthday meal at a Michelen starred restaurant. Sadly not many customers due to covid however very safe set up so would encourage others to go. Amazing value for money.

Edwardscot
The Vincent Rooms I had a very pleasant and relaxed 5 course meal with wine pairing. The food and wine were excellent, the staff are students at the college and are helpful and informative. For £60 it can’t be beat for value. A firm favourite.

W14wanderer
Budding chef’s creations Delicious food created and served by students at Westminster Kingsway College. Six course tasting menu - wine and food - of very high quality and at a very reasonable price. The experience so enjoyable and good to encourage the young chefs who’ll be running our restaurants in due course.

Tully
Lovely lunch, hope to return soon We ate in the Escoffier and had the seafood menu with accompanying wines. All was very good and we enjoyed very much. To my personal taste : 1. the tomato consume added little to the seafood medley. 2. The crumble detracted from the sorbet. 3. The chocolate bavoirois would have benefitted from a contrasting flavour on the plate, eg citrus, ginger, or other fruit. Thank you and best wishes to all the students.

Sue Twyford
Fantastic menu and attentive service A lovely atmosphere with very attentive service, a seven course seafood themed menu. Each course was delicious, the dover sole being a particular delight. The price for a fine dining menu was excellent and well worth a visit, we will be returning and would highly recommend.

Laura E
Perfect lunch - delicious dishes and great service Like most people, my husband and I haven't eaten out that much recently so it was a real treat to come here for lunch yesterday. The tables were spaced out very comfortably and the environment was modern, inviting and spacious. The menu (which changes every week) was really interesting, created in partnership with New Covent Garden Market so you could chose to have an entirely vegetarian 7-course lunch or one which included fish and meat, but conveniently you could pick and chose per course. I mainly had the fish/meat menu but hand-picked the artichoke starter which was so fresh and tasty, a great choice. The pork belly main with scallop was a definite highlight, but all the dishes displayed a high level of sophistication and strong mastery of different techniques. Im a celiac and they were very good at accommodating this in the dishes, even giving me different petit fours. Top marks, we will be returning soon!

Tom_Egerton
The best value, high quality, enjoyable eating in London for sure! We ate at the Escoffier room which is the 7 course set menu option. A bargain at £31 a head which included super high quality produce cooked with skill by the third year students. Interesting, flavoursome dishes with a weekly changing set menu. This week was a sea food based menu which didn't disappoint. service staff are first year students which are learning the ropes in the hospitality world. Maximum effort and attention was given by everyone we met. well worth checking out if you want something a bit special and we will definitely be returning again soon!

Denis438
THIRD VISIT- OUTSTANDING AGAIN Another great lunch with friends , our third visit to Escoffier and many visits to the Brasserie in the past, see pervious reviews. First time to the newly decorated Escoffier, which has been done very tastefully, another truly enjoyable culinary experience and service by the students of a six courses theme menu with matching wines with a vegetarian options if required, outstanding value. The presentation and quality of the dishes were excellent with students explaining each dish as it was served. The whole location is very COVID secure, well done to everyone. This is a must visit when in London, as usual we will back. Thank You again.

Alison M
Try it you will not be disappointed Had a fantastic lunch in the Escoffier room. 6 amazing courses well put together and very reasonably priced, being cooked and served by the students at Westminster College. Julia our server was very personable and attentive (in a non intrusive way) All the courses were well cooked, the standout being the fish course, a perfectly cooked sole paupiette and fine vegetables showing excellent knife skills. With a different theme each week (British seafood this week) certainly a place to visit regularly.

helenW7024UT
Superb food in a Covid secure restaurant This was our first visit in the new academic year. Based on previous visits our expectations were very high and to our astonishment the quality of cooking was even higher than we remembered. We had six dishes between the two of us (we always share!) and all of them could have come from a high-end professional kitchen - they were tasty, innovative and very well presented. David, the student assigned to look after us, was unobtrusive but attentive, showing true professionalism. Also from our entering the building to our leaving we were very aware of how much thought was put by staff into making sure that the whole experience was made as Covid-secure as possible. I would strongly recommend a visit to this restaurant, not only because of its very reasonably priced excellent food and service but also in order to support the college staff in training future generations of hospitality professionals. I thank all of the staff and students for their superb service and look forward to another visit.
Tripadvisor rating score: 4.5 of 5, based on 310 reviews.
LEAVE A REVIEW
SUBSCRIBE HERE FOR OUR LATEST NEWS & EVENTS
FIND US
Westminster Kingsway College
76 Vincent Square
London SW1P 2PD
CONTACT US
0207 8028 391
restaurant@westking.ac.uk
See our reviews on trip advisor Visit our twitter page Visit our facebook page